What is the difference between cancer & whiplash?... Here's what!

That was the question ... posed by David Butler on the noijam BLOG on 29th June 2014

When I first read this post and the reaction on Twitter, I was initially surprised by the fawning sycophantic compliments of self proclaimed skeptics... so I read it again and frankly I was appalled (at many levels).

Then when I suggested via Twitter that the post was 'bombastic nonsense' … I was asked quite logically by a PT student, exactly why I thought so? 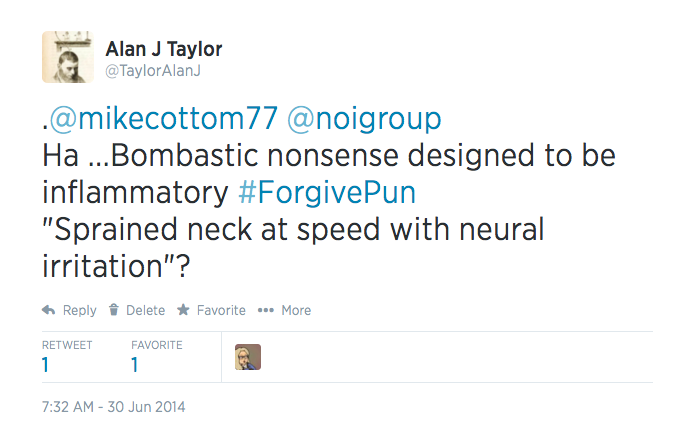 Twitter with its 140 characters is hardly the best medium for such discourse, so here is the response in detail.

1. The analogy 'Cancer-Whiplash' is meaningless and badly chosen . . .

Whilst sympathising entirely with the authors’ stated proximity to the subject (cancer), this cannot allow us to stray into emotional territory … lets keep it as factual as possible.

Cancer is easy to diagnose – WAD diagnosis is in its infancy

Cancer has clear care pathways and the ‘management process can be mapped out with confidence’ – WAD is both difficult to diagnose and little is known about the most effective treatments.

Cancer research is MASSIVELY funded all over the World – WAD has pockets of minor funding.

In oncology, clinicians are more often than not, able to be very clear about the diagnosis management and prognosis - In WAD sadly, this is not so.

Cancer and WAD are NOTHING like each other … the analogy is meaningless.

To suggest so ... frankly verges on disrespect to the genuine sufferers of either malady .... of course, REMEMBER only WAD patients are ever doubted.

2. We don’t need another bullshit acronym! 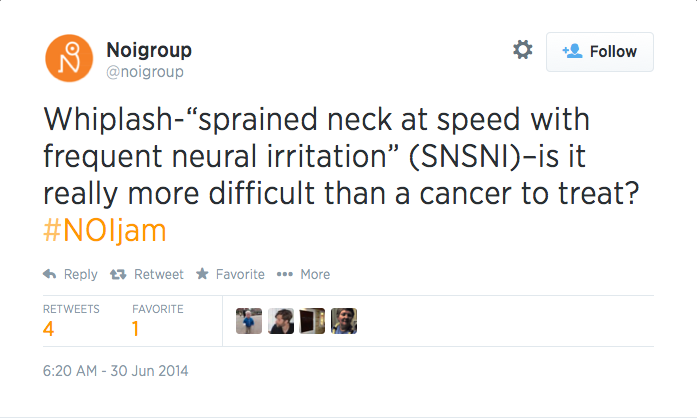 This is the bit when I first started to laugh and double-checked the date …could it actually be April 1st ...?

Then I began to laugh again, this time with tears rolling down my cheeks (see below).

Yes, at its basic level WAD is (‘just’..!) a sprained/strained neck … providing of course, that is ALL the patient complains of!?!

BUT … SNSNI = ‘Sprained neck at speed with frequent neural irritation’ …Help me please …
This HAS to be a joke??

Physiotherapy as a profession, has been beset with a plethora of ever changing, confusing acronyms since its inception … ANT changed to AND … Mmmmm!

In the perceived wisdom of the ‘noijam group’ we should be adopting SNSNI … Oh, wait a minute, can’t we lever in some MORE LETTERS?

'SNASWFNI' is surely a lot catchier ... The (Welsh) medics will really take to that??

Maybe NOIgroup (note the acronym) can hype it a little ...? 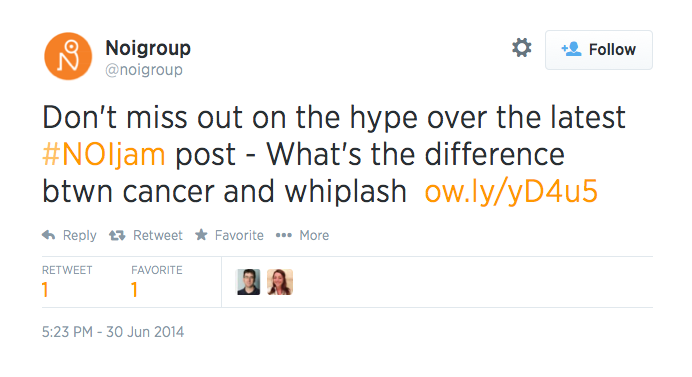 Wait a minute … Haven't the pain scientists been spending some time QUITE RIGHTLY suggesting that we should be changing our vernacular (lose the SCARY language people) when describing conditions to patients.

Lets just imagine the patient-therapist discourse for a moment …

Therapist – “Oh you are probably suffering from SNSNI” ... (go on try saying it out LOUD!)

Patient – “Pardon me, … Uh uh, you sound like you have sinusitis?”

Patient – "Is that what they used to call ‘whiplash’"

Patient – "So what do all those fancy letters mean?" (looks a little worried)

Patient - … (looking around nervously) “… errr, excuse me, I think I need to use the bathroom." (gets up and bolts for the nearest door … )

Is that just THE SCARIEST description you have ever heard??

Shame on you Noijam … You’re promoting the very thing you asked us all to STOP!

… and anyway, why would any skeptic worth their salt, buy into the concept that it is JUST neural tissue involvement in WAD ... That is nonsense by any stretch of the imagination.

Oh of course the caveat of the cleverly used word ‘frequent’ allows a brilliant get out clause.

BUT the suggestion remains. Is this really sound thinking? 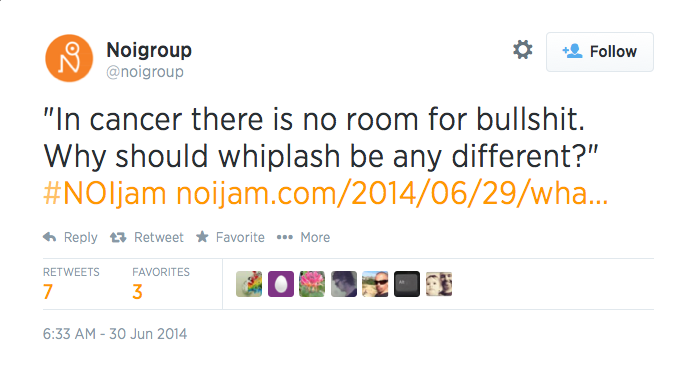 NOIjam group suggested that there was “no room for bullshit” in WAD … and then IMMEDIATELY introduced a massive wedge of nonsensical Guru generated acronym BS straight into the pot??

Or if there is, it is self promulgated, self promoted and self fueled by nonsense and evangelical hype.

Yes, there IS an on-going ‘guru’ culture in PT, but any perceived 'war' is of the protagonists own making. What we have in PT, is a young profession (this is not medicine), struggling gamely to make sense of the ever changing science and the BRILLIANT work done by folk in many fields ... see here and here and here for some examples in WAD.

In WAD … YES at this point in time, confusion reigns, but that is not a time to scoff, sneer or hype up your own paradigm (you're not the first ... and you won't be the last).

YES … Recent RCT’s have shown that many current methods of management have be called into question … THAT IS BRILLIANT ... thanks to those researchers.

…but it is NOT A TIME TO DEMAND APOLOGIES … in some kind of perverted game of 'you were wrong ... BUT we were right' ... that truly would be nonsense of the highest order.

Remember students, clinicians and the PATIENTS sit in the middle of this maelstrom …

Let’s all try and help physiotherapy to change together, with a little less of the NONSENSE & HYPE!

It is a time to reflect, a time to change, a balancing act ... and it may be easier to balance on the middle ground ...

Nothing stays the same ... and pendulums swing! 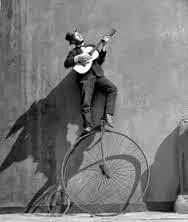 CANCER & WAD ? Yes, it was just an analogy, of course!

But just like the acronym that arrived on our doorstep uninvited ... it was badly chosen.

Go on NOIjam …tell me #SNSNI was actually a product of the hayfever season ...

Sneeze hard enough and the 'war' might be over ... Cheers! 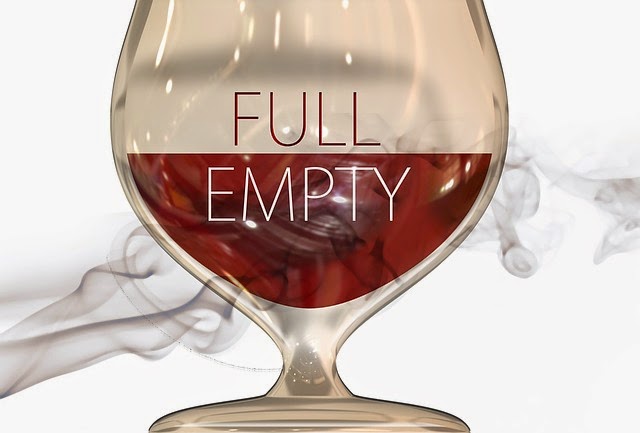 P.S. This post was was submitted to the NOIgroup in response to their BLOG ... Can you see it?

Just the sycophants (WITH hyperlinks...) remain ...

UPDATE (11.07.14) Ad hominem attack from NOIgroup (Group V's individual) ... Here ... Accused of being a 'troll' for daring to disagree ... and prodding the soft underbelly of a Corporate giant.

For those not familiar with this sort of thing ... In argumentation, an 'ad hominem attack' is an attack based on some irrelevant fact about the person NOT the argument ... This sort of thing is not uncommon when someones view or strongly held belief system is challenged see here.

It is perhaps about as low as argumentation gets ... and in its delivery, often reveals a great deal more about the attacker/s than the target.

It makes interesting reading, and illustrates what can happen when any individual challenges a Corporate view of the World ... ugly, unnecessary and perhaps not the best of endorsements for the profession.

What was perhaps most interesting about this vitriolic, attempt at character assassination (apart from the distortion of fact) was the complete lack of insight and humour.

Humour (or lack thereof) can tell us a lot about how people approach critical thinking ... and as one commentator said, "Think about the last time you had your mind blown by a new explanation backed by some elegantly simple research. My automatic reaction is always laughter followed by the words, “Son of a bitch. Why didn’t I see that before?”.

Never be so humourless, as to think yourself above critique. Or, as the French would say, it is always wise never to "péter plus haut que son cul'. 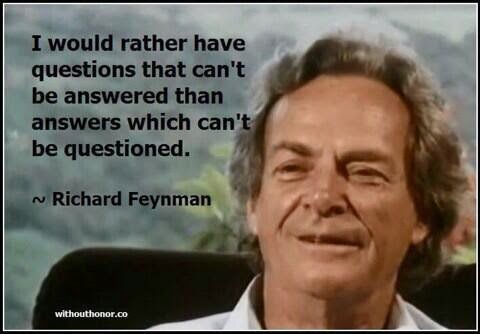 If, on the internet, someone (anyone) chooses to write a provocative, emotive blog ... They simply HAVE to expect someone to be provoked by their rhetoric... to raise a debate or challenge ... Unless somehow they think themselves fireproof or above such challenge.

... It would be a sad passive World if everyone simply nodded in passive agreement to ANY so called authority or belief system.

This whole thing goes way beyond this little storm in a TweetCup, it is a much bigger debate about how a profession deals with change, moves forward ... and how it (and the players within it) really should WORK TOGETHER ... Long may it continue :-)

ACTUALLY ... and for clarity, I think the above paragraph was my KEY POINT

Alan J Taylor - is an ex-professional cyclist, Physiotherapist and writer. Like Bukowski ... "he writes to stay sane". He is a medico-legal expert witness, in the field of clinical negligence related to manual therapy and stroke or other haemodynamic events.

He has worked as a lecturer in Physiotherapy and Sports Rehabilitation & Exercise Science at the University of Nottingham since 2010.

He worked full-time as a physiotherapy clinician until joining the UoN and maintains a clinical case load via his Consultancy, which regularly takes him to to some of the UK's leading sports clubs. He deals with a variety of pain and performance related cases, many with a haemodynamic bias.

Posted by Clinical Reasoning Sessions at 10:34