Forget models, mantras and gurus ... Listen to the patient

The current debate in Physiotherapy about the use and misuse of evidence based medicine (EBM) was well and truly polarised by Roger Kerry's recent Evidence-Based Physiotherapy: A Crisis in Movement.

In a brilliant no holds barred polemic, the author called made a plea for sanity in a World gone mad. It got me to thinking. I've long been an advocate of big picture thinking, and puzzled for many an hour and longer about why we think the way we do. Why for instance, physiotherapists got fixated with the vertebral artery, back in the day when spinal manipulation was all the rage. It slowly became apparent that there was more to cervical vascularity than just the vertebral arteries. Hence the development of a system based approach to the issue which focused on movement (not JUST manipulation), all of the vascular system (not JUST the vertebral artery) and all of the potential pathologies (not JUST dissection). 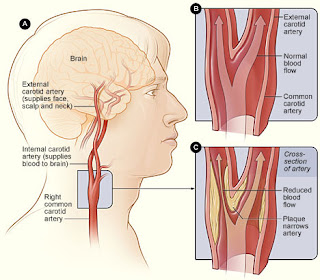 The result was a risk assessment framework which offers sound guidance and direction for those offering any movement based interventions (including assessment) for patients with head and neck pain. The IFOMPT document is not a guideline, rather a framework for THINKING, for clinical reasoning, and directs clinicians to make decisions based on the big picture. It exhorts clinicians to familiarise themselves with cranial nerve testing, surprisingly, (and perhaps alarmingly) not part of the skill set of many PT's, and to consider blood pressure as an additional risk assessment tool. None of this was rocket science BUT, it was perhaps an example of restricted thinking, dominated by the 'experts' of the time.

The new 'experts' of our time are the social media commentators, the 'institutes' the 'organisations' who shape our opinion with their interpretation of EBM. Many seem to shout loudly (and with significant bias) from the roof tops about what we should or shouldn't do. It is a fascinating dynamic, which I have observed from both within and afar. When internationally respected pain expert Mick Thacker wrote a guest editorial recently for Pain and Rehabilitation - the Journal of Physiotherapy Pain Association, he upset the apple cart. He challenged the use of 'mantras' and singular thinking with another brilliantly written piece entitled 'is pain in the brain?'  His commententary, that he was surprised that such views about pain were "…so widely accepted by physiotherapists considering our backgrounds", caused outrage in some quarters and he was was vilified on social media by disciples of the pain/biopsychosocial model. They argued their case with such tactical vigour, you would have to conclude they could not be wrong …. unless of course, you were thinking.

It is perhaps the absolute certainty of some, that I find most fascinating and perhaps a little dangerous.

It is time, as my colleague so rightly said, that we all begin to think for ourselves. 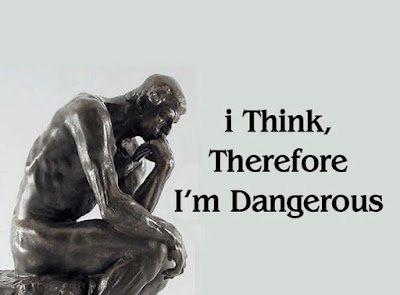 
There's no doubt that the biopsychosocial model has much to offer and only a fool would deny its role and value. But should you throw yourself at its alter? The biomedical model has many limitations, that are well recognised.


But when a patient presents with a worsening scenario, it is worth remembering that not everything is a 'flare up' and just as 'hurt does not always equal harm' ... SORRY but, sometimes it does!

Similarly, whilst modern science suggests most patients with LBP for instance don't require scans or X rays … some do.

It remains our job to be able to recognise those cases and manage the others with whatever skills we have left at our disposal. Otherwise, a sheep like adherence to one particular school of thought may prove to be our undoing. We need to know examination skills, we need to know pathologies … we need to know when scans or triage are appropriate, we need to know the limitations of our own thinking, all these things matter.

I decided to illustrate my point with a cute story ... which nicely illustrates the shortcomings of both 'models' and how we truly have to listen to our patients and put aside our preconceptions.


Mr Xrayspecs (a 52 year old builder and hobby cyclist) walked into my clinic recently, referred from another Physiotherapy colleague. He presented with a description of chronic lower back pain and non specific left leg pain.

I introduced myself and asked him why he'd come to see me.

"Well, I have this pain you see, and I think it's getting worse, so my physio sent me to see you … seems to think you might be able to help" he said, somewhat doubtfully.

"Tell more about it " I asked.

"Well it all started 34 years ago". "34 years", I mirrored and sat back in the chair ready for the long haul.

"They've tried everything" he went on. First, when my leg started aching (aged 18), they said I had a trapped nerve 'sciatica' they called it. They said I'd got an asymmetry. They gave me lots of treatment, you know manipulations and stuff but nothing worked. Then I went to the osteopath and he put all my joints back in … but that didn't work either."

It was a familiar story ... one I've heard (probably like you) many times before. 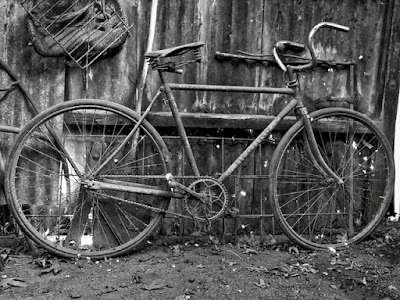 He went on "I just tried to ignore it and carry on riding my bike, but the pain came on every time and my leg felt weak."

Oh, so you felt it whilst you were cycling did you?" I interjected. "YES", he reiterated with some agitation. "Tell me more", I asked, ... "They said I must be trapping a nerve or something, probably because I was bending forward, on the bike". "Oh" I said, thoughtfully. "Then they sent me for a scan, but nothing showed up".

He continued, "I was getting really fed up I can tell you, and about 3 years had gone by". "OK, I can understand that" I said compassionately. "Then what happened" I asked. "Well, thats when they said it might all be in my head" he said (his words). "They sent me to a pain clinic, gave me some injections and told me I should self manage it, but I knew something was wrong". "Oh" I said, brilliantly … pausing for dramatic effect.

"What did YOU think was wrong" I asked. "Well I didn't know what exactly ... but I knew my leg wasn't right, it felt weird, weak, strange, but when I started to say that, I think they thought I was a bit mad, so I backed off a bit". "Oh" I said again, somewhat repetitively, but he carried on regardless.

"I've been to every specialist you can name, orthopaedics, sport, pain, physios, osteopaths, chiropractors, masseurs, you name it, I've been there". "And" I said, probing hopefully. "Well its just getting worse and now I've got back ache too" he continued. "They sent me for more scans recently and I've got wear and tear and disc degeneration now ... and they said that must have been the problem all along".

"So now I'm labelled with chronic pain and I'm having CBT and all that psychological pain education stuff". "Oh", I said hopefully. "Yeah but that's a waste of time, just like the rest of it was … pacing whats that gonna do? Mindfulness? I'm a bloody builder … I'm getting worse, not better and NOBODY LISTENS", he said, pausing for effect.

"What do you mean" I said. "NOBODY LISTENS" he said again, somewhat menacingly. 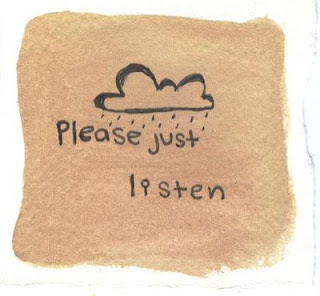 I leaned forward, listening intently with wide eyes. "Look when it all began, it always came on when I was exercising, and it still does, like when I ride my bike, or push a wheelbarrow on site or go up the steps to the roof … I might have back ache now but I didn't before and my leg still feels like it's got no blood flowing into it. To be fair I've been saying that for 34 years but everyone glazes over … Its like they only want to fit you into their bag, their particular pet theory".

"What do you mean" he demanded. 'Well" I began, " I think my colleague may have sent you to see me because he thinks I may have a pet theory too" … It went quiet … I took up the cudgels.

"When you said that your leg felt like it had no blood going to it, did anybody test for that." I asked. "No" he said, "they just kept talking about nerves or discs initially, then chronic pain and CBT and how 'pain is in the brain' and stuff, like I explained." he said.

I asked a few more probing questions about the nature of his pain and asked him to lay on the couch.

I asked if he was still riding his bicycle and if his pain still came on with cycling. "Yes" he said, "as regular as clockwork … as soon as I get to 145 bpm on the heart rate monitor." "Oh" I said. "Can we ask you to exercise to that level I asked'?

"You can bloody well ask me to do what you like if we can get to the bottom of this bugger" he said cracking a smile for the first time. I explained that we may find nothing at all, and asked him again if wished to continue with a simple exercise test. He was already climbing eagerly onto the exercise bike and adjusting his pulse monitor belt.

The exercise test quickly reproduced his leg pain as predicted, as soon as he reached around the 145 bpm mark. I pushed him a little further… 165 bpm "Yes", he said with some satisfaction. "Now my leg feels funny, weak, like theres no blood going to it".

He jumped off the bike and we lay him on the couch … we replaced the left and right BP monitors onto the ankles and inflated them, they ran simultaneously.

At minute 1 the right ankle systolic BP was 160 mmhg. The left recorded nothing (I waited … I'd seen this before) ... the BP can be lower than the machine can record. 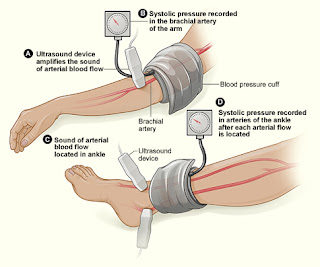 At minute 2 the systolic brachial was 180


I'd turned the BP monitors away from his gaze … He was anxious to know the result.

I explained that he would no longer need to continue with the mindfulness and CBT.

He was referred to the vascular surgeon with a full outline of the consultation and test results.

4 weeks later (after the tests had been repeated the vascular clinic) magnetic resonance imaging of the arteries revealed a significant flow reduction to the left lower limb in the region of the external iliac artery.

The patient underwent a 5 hour vascular surgery (longer than expected due to the complex intra-operative findings) involving endarterectomy and shortening of a 'significantly tortuous artery'.

He made a full recovery and 6 months post surgery reports NO LEG PAIN under any conditions, including exercise. He still gets intermittent low back pain, which he considers to be "normal".

His post exercise ABPI measures have returned to within normal limits (> 0.6)

He has returned to full function work/cycling/running/skiing with NO LEG SYMPTOMS.

For various reasons linked to clinical reasoning and therapist/physician beliefs ... it took 34 years to get to the bottom of this case.

For an analysis of quite how that could be ... try a stab at the 5 Whys of ROOT CAUSE ANALYSIS


What do we all have to learn from this case.


1. Listen to the patient

2. There are limitations of BIOMEDICAL reasoning

3. There are limitations of BIOPSYCHOSOCIAL reasoning

4. NEVER have blind faith for 1 paradigm

6. KEEP LISTENING TO THE PATIENT

... and just for the record, there is NEVER absolute certainty. 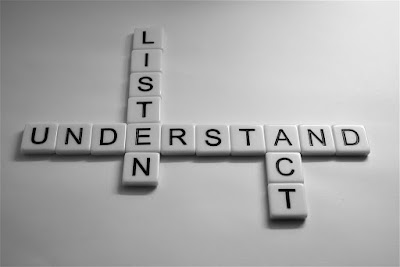 
Author: Alan J Taylor is a writer and critic who thinks about stuff and works as a Physiotherapist and University Assistant Professor ... The views contained in this blog are his own and are not linked to any organisation or institution. Like Bukowski, he 'writes to stay sane'.

You'll find him mostly on Twitter https://twitter.com/TaylorAlanJ
... that is until, he finally deletes his account, or is 'evidence based blogged' to oblivion.

Posted by Clinical Reasoning Sessions at 13:06