"At one time we had truth and lies. Now we have truth, lies, and statements that may not be true but we consider too benign to call false." Ralph Keys 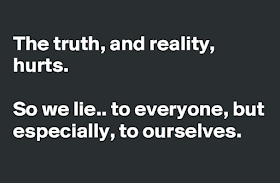 Hurrah! I hear you say (unless you are a member of the AACP that is … acupuncture is not recommended as a treatment for back pain) the new NICE Guideline - Low back pain and sciatica in over 16s: assessment and management has just been published. That means a group of experts have successfully completed months/years of hard labour, poring through evidence to produce a thorough carefully worded (italics for emphasis) analysis and clear guidance.

Of course, it doesn’t stop there! Then we get commentary and analysis via bloggers. Here’s an example of a nice balanced piece by Neil O’ Connell who was a member of the guideline committee. KarenMiddleton added her view on how the guideline marks an important moment for the physiotherapy profession, emphasising the ‘opportunity to evolve and look again at practice and re-evaluate what is best for patients.’ … the guideline gives clear wording (italics for emphasis) on that, and naturally is disappointing for some, yet welcome to others.

Naturally, as is the way of the World, we get the bloggers, sceptics and Twitterati who also helpfully summarise the guideline, and it is here where things begin to get a little messy. What is clear, to us all in the ‘modern World’ is that there is little time to read long documents, and it is human nature to look for short cuts (so far so good). So in many fields such as medicine, pharmacy and physiotherapy we have the rise of the ‘infographic’ …

Now, don't get me wrong here, infographics are brilliant, because they are short snappy and summarise long papers in one interesting and attractive figure. I you’ve never seen the work of Yann Le Meur … then you should. The artistry, accuracy and attention to detail, is both impressive and incredibly useful to visual learners.

not all infographics … how shall I say … meet this exacting standard.

It became apparently obvious to me, that writing an infographic allows the writer to interpret something like a guideline, pretty much any way they want (just as Bloggers and internet commentators do), Herein, lies the rub …

IF the infographic writer, for one reason or another, chooses to alter the emphasis or wording, miss bit out, or get bits wrong … then the reader or recipient can be easily mislead.

So, you end up with a snap-shot that can misrepresent the original document. Which of course, means that ANYONE can create their own version of the evidence base via the medium of the infographic.

Below I’ve written a short infographic (well ... some text and a picture) to help anyone create their own evidence base. If you follow the simple instructions, you can make any, paper review, guideline or article say exactly what YOU LIKE … it is a miracle! 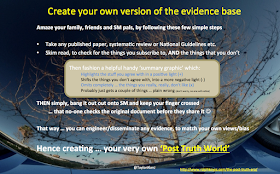 Try it yourself, adjust your favourite intervention, be it CBT, exercise, massage into a slightly bigger font or place on the positive side of the table/graph/pie chart in a slightly bolder colour etc. alter a word here and there (for emphasis/de-emphasis) and before you know it, you’ve changed the message of the original. You can even miss stuff out if you like, say radio frequency denervation or manual therapy (it is entirely your choice), if that’s is something you don’t particularly subscribe to.

Indeed ... if someone from the AACP had thought of it they could have re-inserted acupuncture into the LBP guidelines and lots of folk would never have noticed (cos’ they don’t have time to read the source document). That would of course, be disingenuous, but hey ... politicians do it daily, and we wouldn’t have had Iraq, Brexit or Donald Trump without a little (or more) distortion of the truth.

Where does this leave us? And why did I even bother to put pen to paper?

Well it requires us to have a realisation that we are in the ‘post-truth era’ as detailed so well by Ralph Keyes in his book The Post-Truth Era:Dishonesty and Deception in Contemporary Life. Keyes states:

‘At one time we had truth and lies. Now we have truth, lies, and statements that may not be true but we consider too benign to call false. Euphemisms abound. We’re “economical with the truth,” we “sweeten it,” or tell “the truth improved.” The term deceive gives way to spin.  At worst we admit to “misspeaking,” or “exercising poor judgment.”  Nor do we want to accuse others of lying.  We say they’re in denial.  A liar is “ethically challenged,” someone for whom “the truth is temporarily unavailable.”’ Ralph Keyes

‘We can only understand the motives of such dissemblers by examining the sea in which they swim. Trends ranging from the postmodern disdain for “truth” to therapeutic non-judgment encourage deception. There is much incentive and little penalty for improving the “narrative” of one’s life. The increasing influence of therapists, entertainers, politicians, academics, and lawyers, with their flexible code of ethics, contribute to the post-truth era. So do ethical relativism, Boomer narcissism, the decline of community, and rise of the Internet.’

So there you have it folks … we have to adjust our radars, improve our awareness, be on our guard, even occasionally take the time to read a source document. Because, sometimes those nice folks who wrote that blog may just have written it to fit their own biases, or particular agendas, and in the same way, the handy visual snapshot of reality ... the infographic ... has sadly fallen foul of exactly the same concept.

The dissemblers are amongst us, and I truly don't know why they behave that way.

Now  ... just a brief word on sceptics ... AND pseudo sceptics

The medical World has its fair share of sceptics or skeptics (as they are known in the USA), Ben Goldacre of Bad Science, is perhaps one of the most well known examples, Edzard Ernst is another. These brave souls, speak out on any issues from, basic bad science, global warming, Government policy, Prince Charles and his promotion of homeopathy, through to the risks of spinal manipulation etc.

Good sceptics adopt an open minded approach and use science, debate, exposure (of bad practice) and apply critical examination and inquiry to all sides (including their own).

Here's an example; Ernst has been a long time critic of alternative medicine (AM), and frequently adverse events (e.g. death after SMT) and general poor scientific practice relating to all sorts of disciplines within AM. These range from the more unconventional stuff like 'energy healing', and 'spiritual healing', through to say 'slapping therapy', and perhaps the more conventional, such as acupuncture. As such, he is commonly aggresively vilified and challenged by proponents of such therapies. His response is kindly, gentlemanly debate (often in the face of virtual abuse), use of science, critique, statistics etc. BUT when evidence comes along to challenge his World view on a topic, he has the good grace and conduct, to modify his view according to the developing and changing evidence base, or at the very least, air that evidence.

Of interest to some physiotherapists (either historically or practically), MASSAGE had been a target of his for a number of years, until a new paper caught his eye and he wrote this and then later, this. Ernst is an example of how a GOOD honest sceptic is able to adapt their paradigm to new evidence and update their hypotheses to fit the data. In physiotherapy, SOME of our emerging breed of bloggers, podcasters and self-proclaimed sceptics are able to do that, and do it very well. SOME appear to default to the habits of pseudo-sceptics.

'A sceptic will question claims, then embrace the evidence.

A denier will question claims, then reject (or bury) the evidence....'

and for a brilliant commentary on pseudo-skepticism by Marcello Truzzi go here.

So be on your guard people … it's a tough environment out there, and distinguishing truth from fiction in a post-truth World ain't easy ... false news, pervades every aspect of the internet, even those sources, you thought you could trust, AND relies entirely on a passive (non-thinking) click of a button. Those who use it to their advantage know that, and you should too ... if you don't already!

After all, that is what brought us Donald Trump. Good luck folks.

‘Post-truthfulness builds a fragile social edifice based on wariness. It erodes the foundation of trust that underlies any healthy civilization. When enough of us peddle fantasy as fact, society loses its grounding in reality.  Society would crumble altogether if we assumed others were as likely to dissemble as tell the truth. We are perilously close to that point.’ Ralph Keyes

Be careful out there folks … words matter, and semantics are important AND that is the TRUTH

HT to Woody  Guthrie for being an inspiration -  "It's a folk singers critical thinkers job to comfort disturbed people and to disturb comfortable people" ... see what I did? 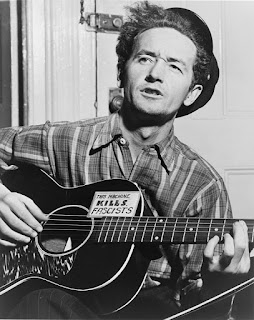 Author: Alan J Taylor is a writer and critic who thinks about stuff and works as a Physiotherapist, University Assistant Professor and Medico-Legal expert witness ... The views contained in this blog are his own and are not linked to any organisation or institution. Like Bukowski, he 'writes to stay sane'.